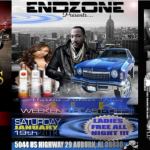 You ever wonder why the New Negros who make these flyers or attend these parties don’t ever use Robert F. Williams, Malcolm X, Stokely Carmichael, or any other of King’s Black Nationalist contemporaries images in the same manor?

I know people will think that it’s because of the Martin Luther King, Jr. Holiday, but it goes much deeper than that.

If you look at the imagery it shows items that are identified with success in the New Negro World; material possessions, objectified women, cold hard cash, and expensive drinks.

The New Negro credits Dr. King with helping the Black community secure access to all that the White World has to offer. They associate King’s Legacy with destroying racial barriers, which they believe prevented Black people from accumulating vast amounts of money, material shit, and status in America.

King’s message of walking hand-in-hand with little White boys and girls is what resonates with the New Negro, and it why he is the most celebrated and well know of the Black leaders in America.

To me these flyers are not disgraceful, they are an accurate reflection of King’s Integrationist ambitions, they are poetic. They really do represent the Dream, weather we like it or not.

The King that rejected Capitalism, Imperialism, Non-Violence, and Integration is unknown to most Black people, they don’t know of his transformation because COINTELPRO make sure he was dead before his Revolutionary message could be fully articulated and acted upon, so King died seeking integration with White America in most peoples eyes. But that is why he is loved by most people in America.

If the awaken Revolutionary Dr. King was allowed to live, he wouldn’t have a national holiday, and he wouldn’t appear on the flyers of ignorant promoters, and our people wouldn’t attend parties that distributed flyers that bore his image is such a way.

You people who love King and hate these flyers only have a few options available to you.

1. If you love the Integrationst King, then shut up and accept that he made it possible for stupid people to throw stupid parties with his image Ps’d on their flyers.

2. If you love the Revolutionary King, and accept and appreciate his legacy and path towards grown; then you need to work your ass off to make sure the Black community is made familiar with the real King, the full King, not just the Dream King. You need to get his books, his Revolutionary speeches, and the documentaries that show the real reason the government murdered King and spread they throughout the community. You need to show the larger community that the King the media feeds them is not the real King. You will honor King and end the disrespect by educating the Black community.

Finally, if you wanna organize a protest or some shit like that, count me out. Unless of course these New Negros start putting Marcus Garvey, Fred Hampton, George Jackson, etc. on these flyers in such a manner, then we can talk about more direct and aggressive reaction.

But that ain’t too likely because by the time a Brotha or Sista knows their names they are beyond doing such such stupid shit as putting any historical icon on pimped out flyers.