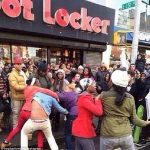 I need one of my upstanding, patriotic, and responsible African-American friends explain something to me.

I’ve been seeing all these people post about how bad it is that poor Blacks have been standing outside of shoe stores to buy the new Jordan 11 Gamma Blues. There are YouTube vids (full of the dumbest, wannabe intellectual commentary I’ve ever heard), and countless Fb and blog post about this issue.

The basic problems folks are complaining about are poor, un/undereducated Black youth who are wasting their money on Jordans, and waiting in line for hours often sleeping outside, and fighting to secure these Jordan Gammas.

I don’t know why all of these upstanding Black citizens…I sorry, I mean, subjects of the American Empire get upset about such behavior. This is simply lower lever consumerism.

Oprah flies to Europe to buy $30,000 purses, Jay Z charters a jet to view a basketball game on the opposite coast, the Black middle-class head to the mall to buy sensible shit, and poor folks have to scrape for Jordans, it’s all springs from the same culture and value system, it all feeds the same economy.

You upstanding, judgmental, and embarrassed African-Americans should be thankful for this type of activity. You live and thrive in a capitalist system (well as far as you are allowed to you do so), and consumerism, obsessive consumerism is what makes that possible.

If the poor didn’t value Jordans, iPhones, and other bullshit over education, proper housing, and organic food, the system would collapse. That’s why the Elite spend billions to create such desires in the poor, and then spends billions more to indoctrinate you to blame the poor and totally over look the fundamental corruption of the systems that gives birth to and nurtures such behavior in the youth.

If the youth stop fighting each other for Jordans in the street and started…I dunno, lets say they started a free food program for poor youth, they started doing armed patrols to protect our community, they started running out the gang bangers, drug dealers, and pimps from the hood, do you know what your response and the response of the US government would be? Fortunately you don’t have to guess, just look at recent history.

When the youth were joining The Black Panther Party, the Black Liberation Army, following people like Fred Hampton and Stokely Carmichael, and shunning capitalism and consumerism the government implemented COINTELPRO. Which is understandable because they needed poor youth fighting over shoe to preserve their economy, not fighting for justice which would collapse capitalism.

None of the is a surprise, White folks gon be White folks when it come to Black folks tryna to do better.

The real shame is that you upstanding, judgmental, and embarrassed African-Americans stood by and did nothing while the youth who did value education, who represented the best of African values and culture, who put the betterment of the community over personal enrichment were attacked by the government, you Negros stood by and did nothing! Yall accepted the propaganda about the Militant Youth, just like you spew propaganda about the ignorant youth.

If you were around back then, then your parents, grandparents, and great-grands stood by and let that shit happen without any organized response, just like you are standing by in the face of government oppression today, you are no different.

So Shut the Fuck up about the youth of today and their fighting over Jordans, because when you fail to support the revolutionary youth, when you don’t give them a greater mission to struggle for justice, when you tell them to integrate and submit to their oppressors, and when you refuse to give them the proper tools, training, and support to rebel; then your are gonna get youth who are fodder for prisons, who will die for some shoes made in a sweatshop on the other side of the world, youth who will show you their asses as the walk through the community.

This is your fucking fault Black adults, not the youth, not the poor and uneducated, but the educated, well-employed, and upstanding African-Americans, your fault!