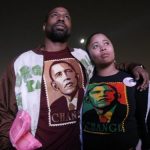 After a White president (I’m thinking it’s gonna be Hillary) is (s)elected and Whites start, as they have always done, criticizing, making demands, and mocking their Commander in Chief, you Black folks better jump up and reminder White people how they shouldn’t expect their president to do any damn thing for them. Yall better tell White folks that they need to deal with they own problems, that they are the source of their woes, and they should leave their president alone.

If not, I’m gonna throw eggs at yall.

Shit, White people have volumes of books, political journals, special interest groups, and Think Tanks dedicated to criticizing and making demands of their political elite, but Black people are supposed to feel like beggars, or mount a nationwide protest movement just to get Obama to meet any of his obligations to the Black populace!

And yes, Obama is obligated to the Black community, when ever you get over 95% support from any demographic in an election, your ass owes.

I’m not an Obama supporter, and the only thing I expected him to do is not impose the Health Care Insurance Mandate that was central to Hillary Clinton’s platform not his, he lied and said he’d put forth a public option; so I long got screwed on my one expectation a while ago. After that Obama has done noting that I didn’t expect him to.

But I know what his election means to Black people like my beloved Grandmother, and I really resent him Pimping the Black vote, and how his remaining Black supporters will not even allowing others to vent their frustration and disappointment without being told how we don’t deserve his attention. That’s really fucked up.