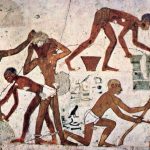 The Jews Were Never Slaves in Egypt
By Dr. Ashraf Ezzat

Did you know that Egypt is mentioned in the Holy Bible approximately 700 times (Egypt: 595 times, Egyptian(s): 120 times).

Obviously, Egypt must have played a vital role in the history of the Hebrews otherwise it wouldn’t have been such a recurring theme in the Jewish holy book.

The land of the Nile has been the theater for the Israelites’ epic stories of alleged enslavement, divine retaliation, wandering in the wilderness and finally a breath-taking and logic-defying exit.