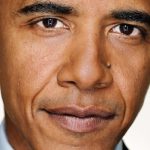 The Affordable Care Act (aka: Obamacare) was a Right-Wing Conservative policy developed by the The Heritage Foundation and first implemented in Massachusetts by none other than Mitt Romney.

Obama’s National Energy Policy is all but identical to the “Drill Baby Drill” policy put forth by his Right-Wing Opponents, and written by Dick Cheney and the Fossil Fuel Industry.

Obama ran on and was elected on his record of opposing the Iraq War, and his opposition to Bush’s torture and assassination policies, but has continued to bomb and threaten other nations, while expanding the drone campaign well beyond Bush’s intent. Oh, and Gitmo is still open and torturing innocent people.

Obama ignored the Occupy movement, until he allowed it to be crushed nationally.

Obama promised to “put on some comfortable shoes” and walk the picket line with workers striking for their rights and fair wages, but has ignored, or refused to stand with workers since taking office in 2008. Obama even stabbed the Chicago Teachers Union in the back as his former Chief of Staff disrespected the teachers and violated the Union contract. The CTU showed Obama support from the moment he announced his presidential run.

Obama has the power to free every single innocent inmate and political prisoner in this nation. He could allow many of the incarcerated freedom fighters who struggled for justice and paved the way for his presidency to re-join their families today! He could allow those Heroes in exile to return to the US and re-join the struggle for justice today! But instead he intensified the repression of US political prisoners and exiles, he even put
Assata Shakur on the US Terrorist List!!

Obama pretends that the Food Stamp, and other welfare policies that were cut in the Sequester were not intended to be cut, but the ‘Sequester’ is nothing more than an expansion of Bill Clinton’s dismantling of welfare and the larger social safety-net with his Personal Responsibility and Work Opportunity Act.

I was asked in 2007 by one of Obama’s regional campaign directors and a respected Black Scholar what I thought an Obama presidency would mean for Black people and I responded, “it will be a catastrophe.” We then began a 9 hour debate about Obama and Black America.

I have to say, my worst expectation for his presidency have been far surpassed. Far, far, surpassed.

In the 1940’s our community was less ‘educated’ but for more intelligent. We used to vote 95% Republican Party back then because it was the “Party of Lincoln, the Great Emancipatory,” but we woke up and jumped ship. I’m not sure if we, thanks to Integration, have that level of unity and political disciple to abandon a Party in mass.

I’m going to keep sharing info and insights, but damn I feel like I’m kicking a dead and bloated horse.

PS: Just as I though we were coming out of the Obama Nightmare, these folks are hitting us with Cory Booker. SMH.