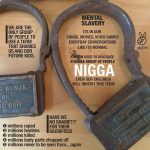 I don’t know why folks gotta lie on us or pretend that Blacks do shit that no other Races do in order to drive home a point.

Black people are not the only people or Race that use racial slurs or stereotypes imposed on them externally, internally as insults, jokes, or terms of endearment.

Asians, Jews, Irish, Anglos, Latinos & all other racial & ethnic groups do this. I’m not saying that excuses us for doing it, but we gotta stop talking that “we the only people” bullshit.