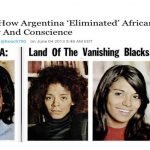 Millions of these helpless Africans washed ashore in Brazil – indeed, in the present-day, roughly one-half of the Brazilian population trace their lineage directly to Africa. African culture has imbued Brazil permanently and profoundly, in terms of music, dance, food and in many other tangible ways.

But what about Brazil’s neighbor, Argentina? Hundreds of thousands of Africans were brought there as well – yet, the black presence in Argentina has virtually vanished from the country’s records and consciousness.

According to historical accounts, Africans first arrived in Argentina in the late 16th century in the region now called the Rio de la Plata, which includes Buenos Aires, primarily to work in agriculture and as domestic servants. By the late 18th century and early 19th century, black Africans were numerous in parts of Argentina, accounting for up to half the population in some provinces, including Santiago del Estero, Catamarca, Salta and Córdoba.

In Buenos Aires, neighborhoods like Monserrat and San Telmo housed many black slaves, some of whom were engaged in craft-making for their masters. Indeed, blacks accounted for an estimated one-third of the city’s population, according to surveys taken in the early  1800s.

Slavery was officially abolished in 1813, but the practice remained in place until about 1853. Ironically, at about this time, the black population of Argentina began to plunge.

Historians generally attribute two major factors to this sudden “mass disappearance” of black Africans from the country – the deadly war against Paraguay from 1865-1870 (in which thousands of blacks fought on the frontlines for the Argentine military) as well as various other wars; and the onset of yellow fever in Buenos Aires in 1871.

The heavy casualties suffered by black Argentines in military combat created a huge gender gap among the African population – a circumstance that appears to have led black women to mate with whites, further diluting the black population. Many other black Argentines fled to neighboring Brazil and Uruguay, which were viewed as somewhat more hospitable to them.