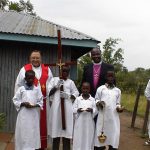 Got a lot of folks telling me that Christianity & the Bible are out of African and when we participate in the religion or adhere to the dogma of the Bible that we are reclaiming what was once, or always African…here’s my response to all of you who try to drape a Kenti Cloth over the King James Bible (or any other Western Religion):

Why the hell we take the Bible and Christianity back from Whites but ain’t took our land, wealth, and scholarship back from Whites. The wealth of the world come from Africa, take that shit back (before you try to take a religion back from them).

Yall ain’t Christian because it come from Africa, yall Christians because Massa gave your (enslaved ancestors) permission to worship Jesus and follow the Bible!

So don’t come talking that Christianity Came from African shit to me.

“If your Slave Master wasn’t a Christian, you wouldn’t be a Christian!” KRS-One

So that “taking our religion” back from our oppressors talk is a scam…here’s another point on the Christianity out of African idea:

If Africans did give Christianity to Europe (which they didn’t, but lets pretend they did), then it was a weapon, an ideological time-bomb, because it exploded on they asses. Look at how many Europeans were killed in religious conflicts and Inquisitions, look at all the Holy Wars! (How many of their own women did they burn at the stake behind Christianity?)

Then that shit blew back on us like a fallout from a nuclear explosion and we killing each other (over the same Dogmas). So even if the fiction that Africans gave Christianity to Europeans were true, we should feel shame about that not pride.