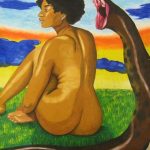 This sick Culture and it’s religion teaches woman to feel ashamed about her body and sexuality, it tells her that she is a by-product of man (from his rib), that she is only here to serve him, that she brought sin to the world, and that her natural and life giving biological processes (menstrual cycle and child birth pain) are curses from God.

That’s why White Culture is Rape Culture, and all systems that have had this culture imposed on them begin to devalue and abuse their women.

It enrages me that so many Men buy into this bullshit paradigm, and it saddens me that most women do.

…every single African man should be at full odds with the Global System of White Domination for what it has done to the status and dignity of the African Woman.

But instead, we got muthafuckas joining in the assault on the African woman and womanhood. Even the African-Centered clowns are trying to impose European Puritanical Standards on African women and African relationships.

I ain’t with that shit! Don’t bring that shit to me. I know we got problems, and our Sisters have their own unique issues, but if you look at the state of the world and you see women as the enemy, a target, or as THE PROBLEM, you are ignorant, or simply too cowardly to attack the real enemy.