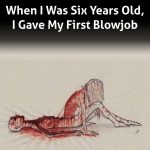 When I was seven years old, I watched a group of fellow second graders cheer as a boy in my class tried to kiss me. He hugged me from behind, giggling all the while.
I threw sand in his eyes, and was sent to the Principal.

When I was eight years old, I had an elderly teacher ask me to stay behind in class. He carried me on his shoulders, and called me pretty.
“Teacher’s Pet!” my friends declared, the envy visible on their faces.
They ignored me at lunch that day.

When I was nine years old, an older girl on the school bus would ask me to lift my skirt up for her. She was pretty and kind, and told me that I could only be her friend if I did what she said.
I wanted to be her friend.

When I was ten years old, a relative demanded that he get a kiss on the cheek every time we met. He was large and loud, and I proceeded to hide under my bed whenever I learnt that he was visiting.
I was known as a rude child.

When I was eleven, my auto-man told me that we would only leave if I gave him a hug every day.
He smelled like cheap soap and cigarettes.

When I was twelve years old, I watched as a man on the street touched my mother’s breast as he passed us. She slapped him amidst the shouts of onlookers telling her to calm down.
She didn’t calm down.

When I was fourteen, a young man in an expensive car followed me home as I walked back from an evening class. I ignored his offer to give me a ride, and I panicked when he got out, only to buy me a box of chocolate that I refused. He parked at the end of my road, and didn’t go away for an hour.
“It turns me on to see you so scared.”

When I was fifteen, I was groped on a bus. It was with a heart full of shame that I confided in a friend, only to be met with his anger and disappointment that I had not shouted at the molester at the time when it happened. My soft protests of being afraid and alone were drowned out as he berated my inaction. To him, my passiveness and silence were the reasons why things like this continue to happen.
He did not wait for my response.

When I was sixteen, I discovered that Facebook had a section of inbox messages named ‘others’, which contained those mails received from strangers, automatically stored as spam. Curious, I opened it to find numerous messages from men I had never seen before. I was propositioned, called sexy, asked for nudes, and insulted.
Delete message.

When I was seventeen, I called for help as a drunken man tried to sexually harass me in a crowded street.
The people around me seemed to walk by quicker.

That it can’t be that hard to be a girl.

I am now nineteen years old.
I am now tired.

By Anonymous
Artwork by Mayka