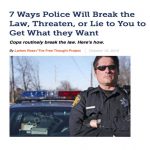 Because of the Fifth Amendment, no one in the U.S. may legally be forced to testify against himself, and because of the Fourth Amendment, no one’s records or belongings may legally be searched or seized without just cause. However, American police are trained to use methods of deception, intimidation and manipulation to circumvent these restrictions. In other words, cops routinely break the law—in letter and in spirit—in the name of enforcing the law. Several examples of this are widely known, if not widely understood.

1) “Do you know why I stopped you?”
Cops ask this, not because they want to have a friendly chat, but because they want you to incriminate yourself. They are hoping you will “voluntarily” confess to having broken the law, whether it was something they had already noticed or not. You may think you are apologizing, or explaining, or even making excuses, but from the cop’s perspective, you are confessing. He is not there to serve you; he is there fishing for an excuse to fine or arrest you. In asking you the familiar question, he is essentially asking you what crime you just committed. And he will do this without giving you any “Miranda” warning, in an effort to trick you into testifying against yourself.

2) “Do you have something to hide?”
Police often talk as if you need a good reason for not answering whatever questions they ask, or for not consenting to a warrantless search of your person, your car, or even your home. The ridiculous implication is that if you haven’t committed a crime, you should be happy to be subjected to random interrogations and searches. This turns the concept of due process on its head, as the cop tries to put the burden on you to prove your innocence, while implying that your failure to “cooperate” with random harassment must be evidence of guilt.

3) “Cooperating will make things easier on you.”
The logical converse of this statement implies that refusing to answer questions and refusing to consent to a search will make things more difficult for you. In other words, you will be punished if you exercise your rights. Of course, if they coerce you into giving them a reason to fine or arrest you, they will claim that you “voluntarily” answered questions and “consented” to a search, and will pretend there was no veiled threat of what they might do to you if you did not willingly “cooperate.”
(Such tactics are also used by prosecutors and judges via the procedure of “plea-bargaining,” whereby someone accused of a crime is essentially told that if he confesses guilt—thus relieving the government of having to present evidence or prove anything—then his suffering will be reduced. In fact, “plea bargaining” is illegal in many countries precisely because it basically constitutes coerced confessions.)

4) “We’ll just get a warrant.”
Cops may try to persuade you to “consent” to a search by claiming that they could easily just go get a warrant if you don’t consent. This is just another ploy to intimidate people into surrendering their rights, with the implication again being that whoever inconveniences the police by requiring them to go through the process of getting a warrant will receive worse treatment than one who “cooperates.” But by definition, one who is threatened or intimidated into “consenting” has not truly consented to anything.

5.) We have someone who will testify against you
Police “informants” are often individuals whose own legal troubles have put them in a position where they can be used by the police to circumvent and undermine the constitutional rights of others. For example, once the police have something to hold over one individual, they can then bully that individual into giving false, anonymous testimony which can be used to obtain search warrants to use against others. Even if the informant gets caught lying, the police can say they didn’t know, making this tactic cowardly and illegal, but also very effective at getting around constitutional restrictions.

6) “We can hold you for 72 hours without charging you.”
Based only on claimed suspicion, even without enough evidence or other probable cause to charge you with a crime, the police can kidnap you—or threaten to kidnap you—and use that to persuade you to confess to some relatively minor offense. Using this tactic, which borders on being torture, police can obtain confessions they know to be false, from people whose only concern, then and there, is to be released.

7) “I’m going to search you for my own safety.”
Using so-called “Terry frisks” (named after the Supreme Court case of Terry v. Ohio, 392 U.S. 1), police can carry out certain limited searches, without any warrant or probable cause to believe that a crime has been committed, under the guise of checking for weapons. By simply asserting that someone might have a weapon, police can disregard and circumvent the Fourth Amendment prohibition on unreasonable searches.

U.S. courts have gone back and forth in deciding how often, and in what circumstances, tactics like those mentioned above are acceptable. And of course, police continually go far beyond anything the courts have declared to be “legal” anyway. But aside from nitpicking legal technicalities, both coerced confessions and unreasonable searches are still unconstitutional, and therefore “illegal,” regardless of the rationale or excuses used to try to justify them. Yet, all too often, cops show that to them, the Fourth and Fifth Amendments—and any other restrictions on their power—are simply technical inconveniences for them to try to get around. In other words, they will break the law whenever they can get away with it if it serves their own agenda and power, and they will ironically insist that they need to do that in order to catch “law-breakers” (the kind who don’t wear badges).

Of course, if the above tactics fail, police can simply bully people into confessing—falsely or truthfully—and/or carry out unconstitutional searches, knowing that the likelihood of cops having to face any punishment for doing so is extremely low. Usually all that happens, even when a search was unquestionably and obviously illegal, or when a confession was clearly coerced, is that any evidence obtained from the illegal search or forced confession is excluded from being allowed at trial. Of course, if there is no trial—either because the person plea-bargains or because there was no evidence and no crime—the “exclusionary rule” creates no deterrent at all. The police can, and do, routinely break the law and violate individual rights, knowing that there will be no adverse repercussions for them having done so.

Likewise, the police can lie under oath, plant evidence, falsely charge people with “resisting arrest” or “assaulting an officer,” and commit other blatantly illegal acts, knowing full well that their fellow gang members—officers, prosecutors and judges—will almost never hold them accountable for their crimes. Even much of the general public still presumes innocence when it comes to cops accused of wrong-doing, while presuming guilt when the cops accuse someone else of wrong-doing. But this is gradually changing, as the amount of video evidence showing the true nature of the “Street Gang in Blue” becomes too much even for many police-apologists to ignore.

One of the biggest realizations with dealing with cops for me was the fact that they CAN lie, they are 100% legally entitled to lie, and they WILL whether you’re a victim of crime, accused of committing a crime or anything else