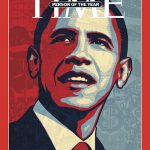 Obama’s election doused all flames of rebellion and reform that were sparked by the rampant corruption and incompetence of the Bush Administration.

Obama’s election is a case study in Machiavellian Politics, Tokenism, and Mass Propaganda. If the Global Elite continue their tactics of using Non-Whites, and Fake Progressives to push their agendas the masses may never be able to mount an effect resistance.

We will literally fall into economic, and worse, ecological collapse while celebrating yet another election victory for the Democratic Party.