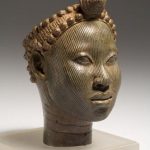 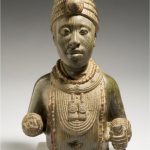 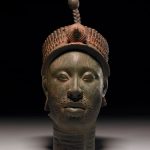 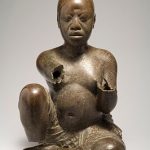 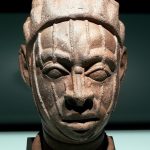 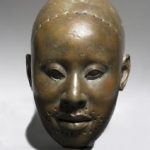 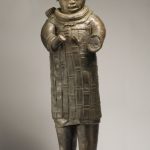 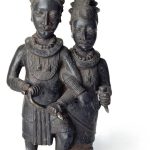 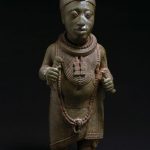 Made from terracotta, bronze, and stone, and dating between approximately 1000 – 1500 A.D., these highly valued pieces of intricately constructed artwork are examples of pre-colonial art originating from the Yoruba people of Ilé-Ifè in southwestern Nigeria.

Ranging from life-size busts to full-length full-body sculptures, as well as animals, these objects are considered examples of realism for their naturalistic and human-like appearances, and most often depict people who made up the elite and ruling class during this time. As people of importance, the large busts made in the likeness of the rulers of Ilé-Ifè were often depicted with large heads because the artists believed that the Ase – the inner power and energy – of a person was held in the head. Rulers were also often depicted with their mouths covered so the “power of their speech would not be too great”. Individual people were not idealized, but rather the office of the king.

In Yoruba tradition, women occupied the position of clay workers whilst traditionally the sculptors of stone, metal, and wood. Involving both terracotta and metalworking, the production of bronze cast works may have been collaborative efforts.

Nigerian literary philosopher, author, poet and playwright Yemi D. Prince, who specializes in Yoruba history, claimed in his book, “The Oral Traditions in Ile-Ife,” that the terracotta artists of 900 A.D. were the founders of Art Guilds – cultural schools of philosophy, which today can be likened to many of Europe’s old institutions of learning that were originally established as religious bodies. These guilds could very well be some of the oldest non-Abrahamic African centres of learning to remain as viable entities in the contemporary world.

Dynasty and Divinity: Ife Art in Ancient Nigeria, an exhibition that is co-organized by the Museum for African Art, New York, and Fundacion Botin, Santander, Spain, in collaboration with the National Commission for Museums and Monuments, Nigeria, is currently on view in Stockholm, Sweden.