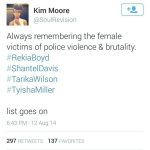 Islan Nettles <—- killed in front of a nypd precinct, her killer is still free