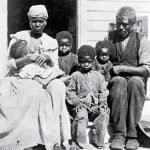 The Slavery Industrial Complex that captured, contained, transported, “seasoned,” and worked our ancestors, allowed our oppressors to come to many understandings.

One of the major understandings was that; “If you get the Ni@@er Wench, and the Ni@@er Buck to embrace their fate without question or resistance, they will train up their little Ni@@er Suckers to obey your will, and accept your system as they have.”

This oppressive wisdom was universally understood, from the Slave Forts on Africa’s western coast, to the hulls of the wretched slave ships, to the plantations that stretched from the American South all the way to South American mining operations.

When slavery was “ended” (i.e. reformed), and Africans were emancipated (i.e. transferred from personal ownership to state ownership) the process of Transference was never ended and is still with us today.

I remember vividly the many adults from my childhood who loved me, cared for me as best as they knew how, and did everything within their power to get me to accept my oppression, my status as a subject of the American Empire, they even encouraged my to give my talents, and life to the oppressor and his systems.

There have been movements to address this but they have failed to reach the masses, they have never been able to fully penetrate this deeply ingrained behavior. It is so ingrained that most Africans who do it are completely unaware of their actions, they truly think they are “preparing their children to have a good future,” that they are “being responsible parents.”

The youth, as always, rebel against this, instinctively, and the adults do their best to impose on them, if the youth are too strong in their rebellion we call on the state to step in to subdue, incarcerate, and if need be kill rebellious young Africans.

Much of the anti-social behavior you see in Black youth, all over the globe, are acts of instinctive rebellion, they degenerate into petty and even major criminality because their indoctrinated parents refuse to give the the tools, insights, and support to rebel effectively.