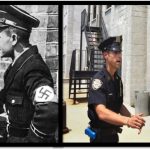 The movement to End Stop and Frisk was dealt a blow by the Federal Appeals Court. The ‘reforms’ were halted and the sympathetic judge was removed from the case.

I was not that invested in the effort to Stop Stop & Frisk because I knew that ultimately it wouldn’t end the police occupation and repression of the Black community. There was no Stop & Frisk law when the police assassinated Fred Hampton. The police never needed a law to attack and degraded black citizens, it part of their institutional purpose.

New York was dump enough to codify police racism and repression into law, after Stop & Frisk is ended, the System will invent a million other justifications and rationalizations for such racist acts.

Those in power know that they could end Stop & Frisk, and yet continue to stop and frisk Black people, so why did the court refuse to allow the laws to be reformed? That’s the real question here.

I think the US is moving toward open and expanding violence and repression of the Black community. They are prepping for civil unrest, and political rebellions. They are grooming the police to carry out greater atrocities against all citizens as the Capitalist steal what’s left of the wealth and resources of this nation.

The White citizens will not be spared but the media will keep playing this up as a Black issue until it’s too late to reverse it, just like they did with the Drug Wars.

The United States is moving from Corporate Fascism to Militarist Fascism, we better wake up and take appropriate action.