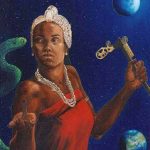 The God of Judaism/Christianity/Islam did have a Goddess by his side at one time, but when she heard that he was constructing a universe to house beings who will exists for the sole purpose of worshiping him; the Goddess told him, “I don’t want no parts of that, don’t put my name in it.”

When the Goddess later found out about God’s intentions to issue eternal punishment for transient sins, to Choose one people over another, to commit mass killings of the beings he created, and all kinds of other psychotic shit, she packed up with their son and moved in with her mother.

God was so pissed at her that he decided to make women the cause of man’s down fall, to give women something called a period, and make childbirth real painful. God banned the worship of his or any other Goddesses and refused to allow women real power or leadership within his religions. Women are cursed in the major religions because of the Goddess’ refusal to go along with God’s egotistical agendas.

After it was all set up the Goddess knew that she just couldn’t be with a Jealous, Vengeful, and Wrathful God, one who needed constant praise and demanded total submission. She tried for over a billion years to civilize and cultivate God, to no avail. So she divorced him. She was willing to give God monitored visitation with their son Jesus however, because she is so loving, forgiving, and understanding.

This all so enraged God that he wanted to punish the Goddess directly. God cooked up a scheme where he’d trick their only son into believing that he would be the savior of mankind, a great hero of God’s little side project. He told Jesus all you gotta do and go to earth and teach the humans the lessons that your mother has been teaching you. Jesus replied, “that’s cool, but you’ve made them pretty savage with all your manipulations dad, what if they reject my lessons, what if they attack me, I’ll be pretty vulnerable down there.” God assured his son that everything would be fine, God told Jesus in no uncertain terms; “if you do this son I will be with you, I will not forsake you.”

We all know how that played out, God got his final revenge against the Goddess.