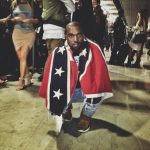 I wonder what would happen if some self-absorbed Jewish “artist” tried to claim the Nazi-swastika as his own, and started selling swastika themed fashions to Jewish children?

I wonder if an egocentric Chinese “artist” tried to make the Imperial Flag of Japan his own, and came out with a clothing line that make the @Japanese Red Sun popular among Chinese youth, how would the Red Army react? (Peep the The Rape of Nanking, if you don’t know why this would be an affront akin to Jews with Swastikas.)

I wonder if a sociopathic Vietnamese “artist” wanted to drape himself in the U.S. Army Special Forces: Rangers and Green Berets’ flag for fashion, considering that the that Tiger Force Special Forces unit is responsible for many atrocities, and the U.S. Military killed over a million Vietnamese people for no good reason at all.

What if an sell-out Arab or delusional Persian “artist” started pushing the flag of the European crusaders in the so-called Middle East?

What if you waked through Little Havana flying a flag with the face of Fidel Castro or Che Guevara?

What if you fucking went into a Crip neighborhood flying a red flag?

We already know what will happen in most of those scenarios. For good or bad, symbols matter, history matters, respect and honor for you ancestors and those who sacrificed for you matters to human beings, to fully formed, intelligent, and dignified human beings.

What does it mean when a prominent artist can drape himself in the flag that represents the genocidal rape, mutilation, enslavement, lynching, and hatred of his people, and there is no real response from the community?

I’ll ask again, are we that fucking far gone as a people!?!?