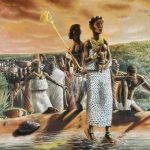 “The Sacrifice of Queen PokuThe Baule people is one of the largest ethnic group in the Côte d’Ivoire. They have played a central role in twentieth-century history of the country. They waged the longest war of resistance to French colonization of any West African people, and maintained their traditional objects and beliefs longer than many groups in such constant contact with European administrators, traders, and missionaries. The Baule belong to the Akan peoples who inhabit Ghana and Côte d’Ivoire. According to a legend, during the eighteenth century, the queen, Abla Poku, had to lead her people west to the shores of the Comoe, the land of Senufo. In order to cross the river, she sacrificed her own son. This sacrifice was the origin of the name Baule, for baouli means “the child has died.” Now about one million Baule occupy a part of the eastern Côte d’Ivoire between the Komoé and Bandama rivers that is both forest and savanna land. Baule society was characterized by extreme individualism, great tolerance, a deep aversion toward rigid political structures, and a lack of age classes, initiation, circumcision, priests, , or associations with hierarchical levels. Each village was independent from the others and made its own decisions under the presiding presence of a council of elders. Everyone participated in discussions, including straggers. It was an egalitarian society. The Baule compact villages are divided into wards, or quarters, and subdivided into family compounds of rectangular dwellings arranged around a courtyard; the compounds are usually aligned on either side of the main village street.The Baule are agriculturists; yams and maize are the staples, supplemented by fish and game; coffee, cocoa and kola nuts are major cash crops. The importance of the yam is demonstrated in an annual harvest festival in which the first yam is symbolically offered to the ancestors, whose worship is a prominent aspect of Baule religion. Ancestors are the object of worship but are not depicted. The foundation of Baule social and political institutions is the matrilineal lineage; each lineage has ceremonial stools that embody ancestral spirits. Paternal descent is recognized, however, and certain spiritual and personal qualities are believed to be inherited through it. The Baule believe in an intangible and inaccessible creator god, Nyamien. Asie, the god of the earth, controls humans and animals. The spirits, or amuen, are endowed with supernatural powers. Religion is founded upon the idea of the immortality of the soul.”