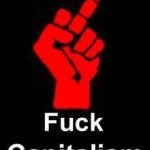 Capitalism has impoverished most of humanity. Capitalism has destroyed many ecosystems, contaminated all of them, and is the engine behind the largest mass extinction event since the fall of the dinosaurs.

Capitalism has provided a small percentage of people in a small number of countries, to live lives of consumption that drives them to clinical levels of depression, poor health, and dysfunction.

Capitalism was imposed, at gunpoint, on all nations outside of Western Europe. No one asked for it, no one would keep it if not for the threat of military invasion from the US and its allies.