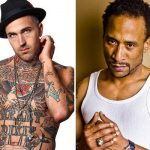 I never thought I’d see the day when a Hip Hop Legend like Lord Jamar is calling out Culture Bandits and their role in our culture and a whole bunch of Black Minstrels line up to attack him, and affirm their subservience to the appropriation of Hip Hop by the Zionist Paymasters.

WTF! Even if you have disagreements with Lord Jamar, stop running to Massa to call him out, call the Brotha, speak directly to him, hash it out behind closed doors and emerge before the outsiders with a unified voice. Don’t publicly attack another African in defense of a Culture Bandit!

I’m sick of these Well Compensated Slaves, from Obama to Kanye, and I’m sick to the masses who are happily being lead to the slaughter (literally and figuratively) by them. SHM.

After over 400 years behind enemy lines, being surrounded by well-armed, and vicious enemies, and being under relentless attack you would think that the Black community would have some solid protocols in place by now!

Respect to Lord Jamar, fuck the Culture Bandits, and fuck the Black Minstrels!

Please secure yourself a copy of Del Jones’ series “Cultures Bandits,” Volumes 1-4, so you can stock up on your Intellectual Ammo and better fight this African Cultural Revolution.