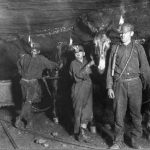 In the US, Slavery was used to establish, sustain, and expand Capitalism, while the White “indentured servants” were used to exterminate Native Populations who got in the way. The only problem for the White Elite in the US was that too much of the profits were being shipped back to England, so they fought the American Revolutionary War.

After the American Civil War slavery was replaced by debt peonage of Blacks, Starvation wages and child labor for the White majority, and sweatshop labor for poor European immigrants. Slavery was still legal and highly profitable too, prisoners and non-White immigrants from Mexico and China were still worked and held in chattel bondage.

Over time, through bloody, protracted struggle against the State, the police and military forces, and other working-class servants of the White Elite, the White masses and a small fraction of the Black citizens were able to secure a level of economic and political standing in America. They forced the government to (through policy, not hard work) create a Middle-Class.

This was a great threat to the Capitalist because, contrary to popular propaganda, Capitalism needs slavery, child labor, sweatshops, genocide/war, and land theft to survive as a system.

The Capitalism were force to export their exploitation to the so-called 3rd World. All the shit the White Elite were doing to the poor and vulnerable in this nation in its early history was done by their descendents throughout the world from the 1940s to now; that’s what Globalization is all about; imposing Capitalist oppression on every single working in the 3rd World.

Just like in the US in the middle of the last century, the exploited masses of the 3rd World are rising up. South America is all but lost, Asia has began to beat their former colonizers at their own game, and the Middle East would prefer to burn than allow the Capitalist to take a foot hold in their lands (Saudi Arabia, is the exception…for now). A few nations in Africa, Mexico, and the Caribbean are all that’s left, but there is hope…right?

Where are these new lands? Who are these passive natives?

They are the original victims of Capitalism and Industrial Production: The White people of the 1st World!! (Oh, and we debased minorities who also dwell in these lands.)

Austerity, Militarized Policing, Spying on civilians, Mass Incarceration, the destruction of the Social Safety Net, Government mandating that the citizens buy a private service (Obamacare), Open Bribery in the form of Campaign Contributions, the shredding of the Bill of Rights and all civil liberation, massive unemployment, forced indebtedness, the destruction of labor unions, heavy indoctrination of the population….the list goes on and on.

Red Blooded, Patriotic, Real Americans are being prepped for a return to Late Victorian, 3rd World Capitalism. I suggest you get a copy of A People’s History of the United States and check out the early chapters, because that’s where the Capitalist are taking the nation.

Remember: Everything a people allow their Imperial nation to do to others abroad always return to be imposed on those citizens. It’s called the Good German Paradigm.

We must join the exploited people of the world, and dismantle Industrial Capitalism, while stripping all power from the Capitalist, or suffer the full wrath of this Omnicidal Systems of Capitalism and White Domination.