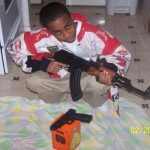 I’m sick of people posting images of youth wearing inappropriate clothing, brandishing guns, or videos of children twerking or cursing each other out, and talking shit about how “those children have no future,” or how “Black people have not future because of the youth,” or the “thug cycle,” or some other dumb shit.

Cut that Shit Out!

First off, the children don’t have a future because we’ve allowed a petty and insane people to drive the world towards total Ecological collapse for no other reason but to accumulate large amounts of Fiat currency. That’s why the youth ain’t got no damn future, not because they cuss or twerk before they reach puberty!

If you really gave a damn about the youth you’d be engaged in a struggle to preserve and balance their world, but you don’t give a fuck, you just want the youth to act right, to act respectful, when you ain’t done shit to earn their respect.

How the fuck are the youth supposed to act whey they were exposed to industrial pollutants in the womb, went all the fucking breast milk is contaminated with Dioxin, and their mothers are so busy being Human Resources they don’t even have time to breast feed them, or fully nurture, putting babies in baby mills (aka: daycare) at six fucking weeks old!

The children are treated like just another commodity, like accessories, like fucking Human Resources. The children who’s spirits and inherent senses of morality isn’t easily broken or distorted are labeled “broken” and medicated and incarcerated.

Instead of following the youth in their rebellion and rejection of this culture and it’s systems, instead of helping them develop more effective methods of rebelling, we work to come up with more creative ways to trick and bribe them into submission to the madness of Capitalism, Americanism, and Eurocentricism.

The babies got a right to cuss, and generally not give a fuck about what the average adult thinks of them.

So if you wanna see what’s wrong with the youth, look in the fucking mirror, then STFU about them.