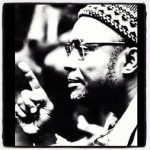 Black August day 28: Amílcar Cabral was born on September 12, 1926 in Bafatá, Guinea-Bissau. in the 1950s, and was instrumental in promoting the independence causes of the then Portuguese colonies. He was the founder (in 1956) of the PAIGC Portuguese for African Party for the Independence of Guinea and Cape Verde. Cabral led the PAIGC’s guerrilla movement (in Portuguese Guinea) against the Portuguese regime, which evolved into one of the most successful wars of independence in African history. The goal of the conflict was to attain independence for both Portuguese Guinea and Cape Verde. Over the course of the conflict, as the movement captured territory from the Portuguese, Cabral became the de facto leader of a large portion of what became Guinea-Bissau.In preparation for the liberation war, Cabral set up training camps in neighboring Ghana with the permission of Kwame Nkrumah. He trained his own troops in warfare, how to grow their own food so they wouldn’t starve, and communication skills. In 1972, Cabral began to form a People’s Assembly in preparation for the birth of an independent African nation, but disgruntled former PAIGC rival Inocêncio Kani, with the help of Portuguese agents operating within the PAIGC, shot and killed him before he could complete his project. His brother took the role of president once the revolution ended a years later. Cabral was one of the greatest minds and thinkers of the African revolution. Peace to you brother. Your service will always been cherished. Hotep! #AmílcarCabral #freedomfighter #revolutionary #african #panafricanist #black #blackaugust #solider #socialist #Guinea #RIP