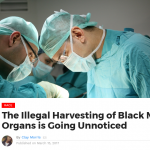 Currently, over 118,353 people need an organ transplant, and about 22 people per day die while waiting for an organ transplant. In this situation, the phrase “desperate times call for desperate measures” takes on an extremely dark persona and ventures into the realm of the illegal harvesting of organs. The World Health Organisation reports that over 7,000 kidneys alone are harvested illegally annually. But with closer inspection at the statistics surrounding illegally harvested organs comes an even more sinister discovery:

Multiple black people have been found dead with missing organs and nothing has been said about it.

Most prominent are the cases of  the following four black men:

14-year-old Jason Smith was found dead in a lake on June 6, 2011, and his death was ruled a drowning accident by the coroner’s reports in Eros, Louisana despite his all of his vital organs missing from his body. Smith’s family is suspicious that this case was covered up because they believe that one of Smith’s murderers is the son of an FBI agent. A petition was called for a further investigation into Smith’s death but it struggled to gain a few hundred signatures.

51-year-old painter Vance Anderson died from a lung condition in 2012 and was sent to a funeral home missing his eyes, brain, heart and pancreas. The autopsy permission form requires consent for Thomas Jefferson Univesity Hospital to “retain tissue for medical research”, however, Vance Anderson’s mother Pastor Mary Anderson says she has no recollection of consenting to the “desecrating” of her son’s body. Mary Anderson was last reported to be suing Thomas Jefferson University Hospital for stealing her son’s organs as she stated to local Philadelphia news station WTXF “Ain’t no way in the world, if they explained to me they’re going to take my son and experiment with him and throw his organs in the trash, that I would’ve consented to that.”

In Savannah, Georgia 17-year-old Kendrick Johnson’s body was uncovered January 11, 2013, inside of a rolled up wrestling mat. Johnson’s family discovered him to be missing his organs although the South Georgia Lowndes County Sheriff’s investigation ruled Johnson’s death a freak accident. Subsequently, Johnson’s parents contacted Dr. William R. Anderson  to perform a second exhumation of the body, and the pathologist revealed that there had been intentional trauma placed on Johnson’s carotid artery that seemed far distant from the signs of a freak accident. Dr. Anderson also discovered that the cavities where Johnson’s internal organs had previously been were stuffed with newspaper. Lowndes County Coroner Bill Watson said that the organs of Johnson were rapidly decomposing and had to be disposed of immediately, but expert embalmers have since denied that newspaper is an acceptable filler for empty space in body cavities.

Married gay model Ryan Singleton was on a trip from Atlanta to Los Angeles when his car broke down on July 9, 2013, in a California valley desert. Singleton was nowhere to be found once the friend that he called for help arrived to help him. The San Bernadino County Coroner’s Office reported that ‘Animals might have been involved’. However, when Singleton’s body was found his eyes, heart, lungs, and liver were all gone sparking the question of whether or not animals were sufficient enough to rule out foul play in Singleton’s death among Singleton’s mother and his partner Kithe Brewster.
It seems that the air supply to the conversation about these men’s deaths is being cut off because someone does not want the general public to be aware of this phenomenon. The motives behind these deaths have yet to be discovered, but can be presumed to be the direct targeting of African-American men for their internal organ as well as in some cases a connection to the ongoing plague of human trafficking. The four sickening cases detailed all took place between the years 2011-2014 but yet no recent major coverage on the stories can be found. Additionally, there are no editorials on the topic of the illegal harvesting of black people’s organs from any mainstream media outlet. In her book, Old Habits Die Hard: Medical Apartheid, Harriet Washington says that “Only 5 percent of black Americans surveyed by DePaul law professor Michelle Goodwin considered presumed consent a legitimate source of organs.” If this is the truth then we must ask why so many black people being found dead/dying with all of their internal organs missing? The topic remains silenced.

Been going on for decades