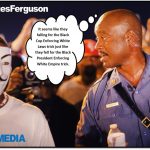 Pacification; Through Violence or Appeasement is Still A Defeat, Not Justice.

If we keep falling for this old Okie-Doke, they gon end up appointing a Black man to lead the Klu Klux Klan; and the Black masses will march with him as he wears his Grand Dragon hood and robe. I swear!

Yall do understand that, if Captain Ron was given the order to go into Ferguson, Missouri with his guns blazing, then that’s what he would have done; but the order came from on high to pacify, instead of liquidate; that’s the only reason he talking & walking instead of shooting & killing.

They chose to do a psy-op instead of escalate the military campaign against our surrounded and hounded Brothers and Sisters in Ferguson.

I’m sure ole’ Ron will get a promotion for demonstrating the success of this tactic, maybe even a Beer Summit with Obama.

I guess the masses will soon return to their Political Slumber, they will work and consume like good Human Resources until the next atrocity (or, the next atrocity that gets the national spotlight, because this System and its enforcers commit atrocities daily…, hourly, every second).

Luckily, or unfortunately; depending on your perspective; the Fascist Cops, or the White Vigilantes won’t make us wait very long until the next atrocity, and the rage from the current atrocity seems to be dissipating with us, yet again failing to establish protocols for, or commit resources to our collective self-defense and empowerment.

So rest up until they come again, because our tactics may not be effective in ending the oppression, but they sure ass hell require us to expend a whole lot of energy, wasted energy. SMH.