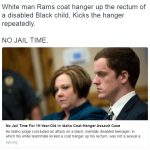 19-year-old former high school football player John R. K. Howard raped young Black kid with a coat-hanger and received no jail time on Friday. He was sentenced to probation and community service, and his conviction might be entirely dismissed at a later date. Originally Howard was charged with sexual assault but prosecutors later decided that, while they were confident they could prove Howard kicked the coat hanger into his teammate’s rectum, the act did not constitute a sex crime.

The Guardian has more on the specific allegation of assault, which began with an invitation for a hug:

“The young man said that one of his friends motioned for him to come over and hugged him while another player shoved a hanger into his anus. Then, the victim said, Howard kicked the hanger, which pushed it further into his rectum.

” ‘Pain that I have never felt took over my body,’ he said during the April hearing, according to the transcript obtained by the Guardian. ‘I screamed, but afterwards, I kept it to myself.’ “

In addition, the Black kid said that Howard taught him how to sing a

KKK-glorifying song, called him repeatedly the n-word and together with his teammates called him “fried chicken,” “watermelon,” “Kool-Aid” and “grape soda,” according to the

“Whatever happened in that locker room was not sexual,” the judge said. “In my view, this is not a case about racial bias,” he added.

“People from the east coast have no idea what this case is about,” he also said, according to the Guardian. “But I’m not going to impose a sentence that is not supported by the law.”

This is disgusting. This is insane. No jail time for ruining the life of the Black disabled kid… If it’s not a hate crime, what the hell is this?