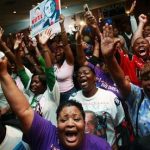 We think we can ride Obama’s coattails into full integration with White people and the American government, but that ain’t happening, we are falling into deeper poverty and isolation under Obama, but because we can see a Black family in the White House we somehow fail to fully register our decline. This psychic numbness is a by-product of over 3 centuries of enslavement and oppression, we have gone insane as a people, we all suffer from Stockholm syndrome, some are more advanced in the psychosis than others.

We love and worship any Black man who we imagine can get us closer to White people. We love Dr. King, not because he was a fighter for justice, but because he shared our dream of ‘little White girls and boys waking hand in hand with little Black girls and boys.’ We love and worship Obama because we are all able to vicariously live in the White House with him, Michelle, and his two daughters. We imagine that he has paved the way for our little Negro boys and girls to rise to the highest positions within the Empire.

We never had massive, multi-generational therapy sessions to help our ancestors and ourselves heal from the trauma of 300+ years or rape, enslavement, degradation, mutilation, murder, and mis-educaiton; we are still as deeply affected by that trauma as our ancestors who were shackled on the plantations.

Franz Fanon, a revolutionary psychiatrist, observed that healing from the psychological scars of enslavement and colonization can come only when the slave or colonized man strikes a blow against his tormentor. The very moment the oppressed can separate him/herself from his/her oppressor enough to lash out, they embark on the road to being fully human. The violence that created a slave can only be healed through the violence needed to free the slave, Fanon concluded.

I know the prospects for a violent revolt are not as promising today in the US, as they were in North African in Fanon’s time, but we are still in a position to strike political, economic, and cultural blows against our oppressors. We can still begin the process of killing the slave within ourselves and constructing a New African from the remains.

The Obama election has proven that we will not gain acceptance from the White majority no matter how willingly we serve their interest, or how well we adopt their values and culture. We can all become willing agents of the American Empire and they will still hate and disrespect us like they do Obama. So it is wiser and more just for us to chart our own path in this society and in the world, separate and distinct from our oppressors.

We embraced King’s dream, and they killed and buried it. We pretend that Obama was a resurrection and actualization of that dream when he was a mere perversion of it. We need to stop digging up the rotten corpse of that dead Dream and create a New Way.

A New Way for New Africans.