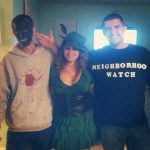 The US has an ongoing undercurrent of Racism and a blatant policy of Black Genocide, but Black folks can only manage to be outraged when that undercurrent bubbles to the surface in the form of some obese Southern Belle getting busted saying what the vast majority of White folks think, or when some powerless White people don some racists Halloween costumes.

WTF am I missing here?

Listen, if no White person ever utters the word ‘Nigger’ again for all eternity, and White people only wore Frankenstein and Bride of Frankenstein costumes from now until the end of time, that shit wouldn’t change a damn thing for Black people! We’d still be on the fast-track to extinction along with most of the biosphere!

Now, if a RedNeck is walking through the Hood taking that ‘Nigger’ shit, then by all ,means, handle your business. If some White folks dare to come to a Halloween party in the Black community in Black-Face, we already know how that shit would play out.

But if these cowardly petty racist wanna win points with other cowardly racist by saying shit and doing shit that they would never ever attempt to do in the presence of a real Black man or woman, then fucking ignore them!! That ain’t the shit that requires our attention right now, Black people!

I’m not even gonna bother telling yall what the real issues are because most of yall already know, and if you don’t just review some of my older post.