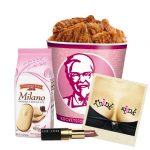 Capitalism doesn’t seek to solve problems, only profit from them.

The Cancer Industry is a perfect example.

The Capitalist have spent the last couple of centuries toxifying our environment. There is not one ecosystem on this planet that has not been polluted to some degree by industrial production which generates the capitalist’s profits.

Polluted ecosystems lead to polluted bodies, every human body on this planet is full of chemicals and substances that were unknown to humanity just 75 years ago.

For instance, every single woman on this planet has Dioxin in her breast tissue, and all human breast milk is contaminated with Dioxin.

Cancer, once a rare and mysterious disease is now as common as the Common cold. Human cancer rates have ballooned in direct proportion to the contamination of our environment with industrial toxins.

Sooo…what do the Capitalist do?
Do they stop emitting these toxic cancer causing chemicals?
Do they better regulate and monitor the pollutants?
Do they simply tell the public the truth about cancer?
Fuck naw!
They create a profitable industry around cancer!

Breast Cancer is the hottest and most profitable cancer of the moment.

Not one mainstream Breast Cancer Organizations are focusing on industrial pollutions and other environmental factors that are driving up cancer rates.

Capitalism is killing us, and the rest of the world for profit. It is bribing us to either joint them or passively allow to kill the planet.

That’s all, enjoy your weekend.