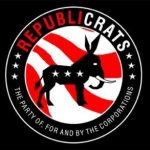 The Corporate Media has managed to convince the general public that the two major political parties are fighting against each other to server the interest of the people who elect them when they are actually fighting each other for the opportunity to sever the interest, and do the bidding of the multinational corporations, and the global economic elite.

99.8% of voters who vote for a Democratic or Republican candidate in a National or Local election is voting against their own class, national, community interest at this point.

If you still believe in or want to participate in the US political process your only viable option is Third Party Candidates, or not voting at all.

You have options, do you have the courage and integrity to exercise those options?

Engage the Struggle on all fronts, from political, to economic, to the grassroots.