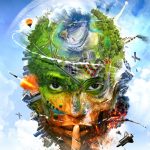 I Pray (yes pray to every god, goddess, and to the Universe) that a catastrophic storm driven by Global climate change causes the cancellation of a major sporting event like the Super Bowl or the NBA Championships.

I Pray that Ocean acidification begins to cause erosion to the engines and hulls of the luxury yachts, and massive cruise ships that the Elite and Celebrities like to spend their millions on.

I Pray that the Mass extinctions of animals begins to hit Beef cattle, BROILER CHICKENs, and other animals that First World people consume, and that mass extinctions and Deforestation decimating our plant diversity begins to hit Commodity crops, the plants used to make wine and beer especially.

I Pray that Monsanto begins to breed Genetically modified organisms for caviar, truffles, fois gras, and all the other exotic foods that rich people like to eat.

I Pray that the Elite and their Celebrities find out soon that their Gated communities don’t protect them from Nuclear fallout, Dioxin contaminated food and water, Crop Failure, and that soon the gates won’t even protect them from the desperate people whom they have exploited to the point of insane desperation.

I Pray that Austerity makes governments no only too (morally) bankrupt to finance welfare, healthcare, and infrastructure maintenance, but the cuts also extend to Corporate welfare, Defense spending, and Surveillance. Just imagine; A government too broke and dysfunctional to oppress its citizens or support an empire.

Yes, I’m reduced to Praying yall, because as long as the poor in America, and the citizens of the so-called Third Word are suffering too few give a damn, too few are willing to exit their comfort zone and oppose the Omnicidal Systems of Capitalism and White Domination.

We’ll see if the horrible outcomes of these Systems will be addressed when they start to directly impact “the people who matter.”

Note: Prayer is just a formality, this shit is inevitable.