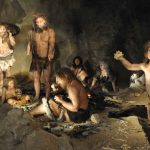 This deep and biting Chicago Cold allows me to truly sympathize with our Oppressors, no, seriously, I feel closest to them this time of year.

I can just imagine evolving under these kind of conditions, Cold, Sunless, Barren, and Colorless. Shit!

Just think about the times when you were really cold in your life, how tense you were, teeth clenched, stiff, unable to really relax at all. Plus, you couldn’t really think about the well-being of others in such a state, you could only think warmth, escape, consumption (of heat), survival.

That ain’t no kinda condition for any primate to evolve in, you’d have to really subvert your instincts and adopt a whole new set of behaviors and interactions to endure.

You’d have to see your environment and nature as your mortal enemy, as something that will kill you if you fail to dominate it. You’d have to fight to live, to kill to live, to dominate to live in frigid land. That shit was pure misery, for centuries upon centuries, surviving in an icebox. The kinda shit you gotta do to endure in an unnatural state will drive any people mad, just visit the Hood if you doubt me.

Then imagine how they felt when the glaciers receded after several generations, and they creep out into the larger world, and came upon people who are clean, well nourished, melaninated , and their lands are warm, green, lush, vibration, tropical, inviting, and vast.

Just imagine how our ancestors welcomed them into their lands but they quickly found that they’ve evolved in such a way that will no longer allow them to embrace the sun and thrive in such an inviting habit, if they wasn’t crazy before, they went bat-shit insane after that. SMH.

So imagine if you were in the “pre-historic” caveman’s shoes, even though they had not invented shoe yet; what would you do?

You sure ass hell ain’t about to just go back to the icebox, but you can’t live as one with the land either, so your only choice would be to impose your adapted, and anti-nature way of being on the tropical lands.

You’d bring all kinds of shit that worked in the icebox out into the tropics and the rest of the world because that’s the only way you can dwell outside the icebox. None of the melaninated people would willingly embrace this “way of life,” so you had to dominate, enslave, colonize, kill them until they were broken and rejected their true way of life.

I get it, I really do. Shit if winter lasted more than just a few months in Chicago, I’d have to bounce.

So, I implore you my Brothas and Sisthas, on this day, the day of one of their most cherished Pagan Whole-Lie-Daze, let your local representative of the Oppressor Cast know that you understand and sympathize.

Try not to bleed so much on the uniform of the Fascist Cop who’s violating you human rights, try not to be so resentful as you buy GMO food from that parasitic, corporate grocery store that they’ve opened in your hood, try to be more understanding as you breath the polluted air and drink the contaminated water, just for one day.

Let em all know that, even though we must opposed and subvert them, that we understand their endless drive to dominate, bash skulls, suck bone marrow, steal resources, thrill kill, and destroy ecosystems. We truly understand.

The Revolution will be here in the morning, just let them have today.

Merry Consumerism, and Happy Whole-Lie-Daze to you all.