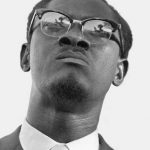 Patrice Émery Lumumba (2 July 1925 – 17 January 1961) was a Congolese independence leader and the first legally elected Prime Minister of the Republic of the Congo after he helped win its independence from Belgium in June 1960. Only twelve weeks later, Lumumba’s government was deposed in a coup during the Congo Crisis.[1]He was subsequently imprisoned and executed by firing squad, an act that was committed with the assistance of the government of the United States and for which the Belgian government officially apologized in 2002.