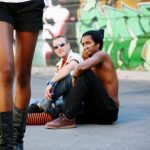 Most of the cat-calling behavior is learned, the young males see the older males doing it, but the true origins go much deeper.

It dates back to Slavery and Colonization. Africans were not allowed to have intimate, caring, and stable relationships, so in order to shield ourselves from the trauma of being forbidden to express and practice African love and connection, we pretend that we didn’t want or need it.

Cat-Calling is a devaluation of women and a psychological defense mechanism for males, it is commodifing Black women, it is the fucking auction block!

Men who accept their true role in the community do not Cat-Call or harasses women. It doesn’t matter how the woman is dressed or conducts herself.

The White Massa who Black males wanted to emulate treated Black women and White women like property, so we though that objectifying Black women would make us at least look strong, verile, and powerful.

In our liberated state, African women would work, play, and travel top-less and no one would bother them. The Europeans couldn’t understand how all these Africans would walk around 90% nude and there is no leering, no groping, and not constant rape; they called us primitive because animals are naked, they didn’t understand that the problem was with them, and their deep seeded insecurity.

We have reduced sex to an economic commodity like those who enslaved us; we were breed like cattle, and our children were sold off to the highest bidder, we’ve yet to heal from that trauma. So now, sex for many who have not healed from the trauma of our past and current oppression still treat our women as if they are on the auction block, like sex is just an exchange, something a woman gives you or withholds from you, instead if a shared experience. Woman judge men by their money and material possessions, not their principles and values.

We are both (Black males and females) infected with the most toxic culture and practices ever developed.

Cat-calling is just one aspect of this overall reality.

(Note: Although I never cat-called, I was mostly indifferent to it. I held the wrong opinion that the women were sometimes responsible for the misbehavior of men they don’t even know. It took some patient women, and some study to help me better understand this issue.)