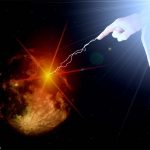 I’ve just been told that God is behind the most recent weather catastrophes. A believer told me that God was showing his disfavor with us, due to our misuse of doctrine.

I asked this individual (and I ask now the rest of you who believe this); why does The Almighty would hide his wrath behind seemingly scientifically explainable, and foretasted weather phenomenon.

Hell, if god wants to send a storm to punish us could he at least bring one up outta nothing, why does he work within the normal weather and seasonal patters of the atmosphere to bring his judgement?

Is God trying to leave (what we political scientist call) Plausible deniability? Is he trying to make sure that, if he had too, he could duck any law suits or insurance or legal claims against himself or his Heavenly Host?

Does God hide his hand because he isn’t just killing Black people, so if he’s brought up on murder charges he won’t walk like Zimmerman did?

Is he afraid of being sued and having to come up off of some of those 10% Tithes he’s been collecting for the last 2000 years? LoL.

(For those of you who really wanna know what’s up with the weather Google: Anthropogenic Climate Change.)