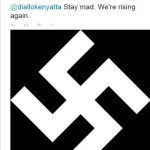 I get these kinda messages often. These White folks are so damn delusional. They don’t even know where they stand in the hierarchy. I’m sure the White Elites get more laughs out of them than I do.

This particular WRIT thinks he’s rising, shit the only thing rising for these White Nationalist are the damn leukemia and autism rates for their children, there personal debts, their mental illness, addiction, and suicide rates. SMH.

They keep forgetting that the government has stocked up on way more bullets, and built way more prison cells than they need to just kill and incarcerate us Black folks, they don’t remember that although their beloved Hitler killed over 6million Jews, that he was responsible for more than 100million deaths of the “good” White people.

Damn, if working-class and poor White racist ain’t the dumbest fucking population on this planet.