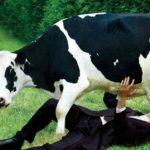 You have:
-Producers (plant life, organisms who can convert solar energy into matter.)
-Herbivores / Frugivores
-Omnivores
-Carnivores
Each of these are vital to any ecosystem.

I know that most people place Humans in the omnivore or carnivore category, even though humans lack the tools to truly be either. They lack the claws, teeth, strength, and digestive enzymes to act as true meat eaters; but people like to think that tools and technology are adequate compensation, but there are other issues to consider.

Omnivores (opportunistic eaters) provide a vital service to their ecosystems, they return as much to the environment as they take. Their ability to have a diverse diet and wide range actually creates space and opportunity for more specialized eaters.

Human Omnivores only strip their environments, they only take, they deny other species space and opportunity to thrive. Humans are not omnivores, it takes more than a varied diet to be classified as an omnivore.

Carnivores also provide an invaluable service to not only their ecosystems, but to the animals they hunt. Carnivores target the sick, old, infirm, and injured animals. They prevent the spread of disease in a herd, they prevent injured and diseased animals from suffering a long and painful death. They also drive the development of their prey, they co-evolve and develop with their prey, there is a respectful relationship between the two. Also, the beast doesn’ take more than it needs to survive. Many animals depend on the carnivore, and the carnivore is aware of its deep dependence upon the animals they hunt.

Human Carnivores do not provide any of the services that true carnivores provides to the animals they eat. They do want to eat the diseased animals, they (seek to) eat healthiest animals who are at their peak of development. They don’t drive the development of their prey, they breed them for weakness, passivity, and to be utterly dependent on human inputs for their survival. Human Carnivores do more to destroy ecosystems and wild animal and plant species than any other being on this planet.

These Human Omni/Carnivores are more akin to Parasites, Cancers, or Viruses in their impacts on their environment, they over-consume, weaken, and eventually destroy the ecosystems they dwell in.

I know how our ancestors ate meat, but they didn’t have the technology to fish the seas until they become totally lifeless, to erect feedlots that can hold over 5million heads of cattle, to produce and kill over 6 billion chickens yearly, to strip the land and cut down rainforest, to consume and pollute until the planet becomes totally lifeless.

We need to once again to evolve and adapt, we need to do what’s best, not whatever is possible. Veganism is the only responsible and humane path for those of us who dwell in the so-called 1st World.

Vegans can live on less than 1/14th them amount of acreage than it takes to feed a Human Omni/Carnivores. We consume less, thus produce less waste and pollution.
At the very least educate yourself on how you dietary choices impact your own health, the rest of the world.

(Note: I’m talking specifically about Meat eaters in the Developed Word, and in Asia, those who are fed by industrial food production, not the Bush Man who hunts the occasional antelope, or Masai herdsmen.)