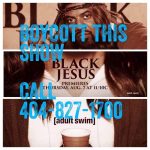 This is the first shit I saw when I logged on this morning.

If I remember correctly the last time our New Negro, Talentless 10th, Black Misleadership Class tried to organize a boycott it was against the show ‘Sorority Sisters’ a “reality show” about Black Greek life.

Now the New Negros have a new mission, to boycott Black Jesus!

As fucking if we ain’t go bigger fish to fry.

If Jesus, or God (or as I like to call him; ‘The Blessed Virgin Mary’s Baby Daddy) ain’t seen fit to send down the lightning bolts, or the avenging angels to disrupt the production, or maybe strangle the producers and creators in their mother’s wombs (yall know Mary’s Baby Daddy ain’t got no problems killing babies); then maybe your God has developed a sense of humor over the centuries, maybe he’s no longer as insecure as his followers believe him to be, maybe old age has reduced his blood lust, maybe he sent one of his angels to Colorado to cop some of that legal weed and smoking that has mellowed him out.

So maybe you New Negros can use your time, energy, and resources on other shit than protecting the reputation and ego of your All Mighty Creator, and solve some real problem; because even if your God is still insecure about his image, or if he’s mellowed out, he still ain’t seen fit to address many of the real problems plaguing humanity, we need to deal with all that shit on our own, so let’s do dat, and leave this fucking show the fuck alone.

(If I had cable, and the time, I’d watch the damn show just to violate the boycott!)