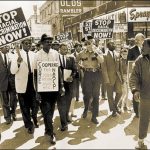 The (despised & oppressed) minorities who took advantage of racial isolation and mandated separation from the White majority, and used that position to build racial solidarity, and cultural cohesion are secure. These groups have strong ties to their countries of origin, they are relatively wealthy, and hold both proportional (or greater) economic power in the US and internationally.

The (despised & oppressed) minorities who chose to reject racial isolation, and the mandate to remain separate from the White majority, abandoned racial solidarity and lost their cultural cohesion, they have only superficial (if any) ties to their nation/continent of origin; they traded it all for assimilation and integration. These minorities are very insecure (still fight for the actualization of what they supposedly won decades ago), they are relatively poor, and only hold symbolic political power (i.e. tokenism). The limited riches they have (riches, not wealth) is predominantly in the hands of the most disloyal members of their race who have the most hostile feelings towards rebuilding any of the racial solidarity and cultural cohesion that was lost during the integration struggle.

I could list which minority/ethnic/racial groups fall into which category, but why bother, the only important thing is that Africans in America fall into the later group and we need to work our way back into the prior group. We must also surpass the prior group to go beyond status and power within this nation to Global African unity and power.

The major problem is that we are now trying to reintegrate into the new Corporate, Globalized Economy the US is promoting instead of paving our own path. We are educating a new generation to assimilate into and serve the needs of the White majority which still despises and oppresses us. We do this instead of making connections with each other internally and building with the African population globally. WE ARE REPEATING THE SAME DAMN FATAL ERRORS!

We still have the time (it’s very limited, but we still got it), talent, and resources to change course, I simply don’t see the will. I’m not saying the will is not there, its just I haven’t seen it in sufficient quantity to redirect the Race. I don’t know if it’s me simply being on the outside of that struggle, or if we are simply lacking in will.

Either way I know we must get ourselves on the right path. This is the last opportunity we will have to secure full and total Liberation, anything less is going to bring about the destruction of the life sustaining capacity of the entire planet.

I am saying that without a strong counterbalance to the Systems of Global White Domination, and Industrial Capitalism, the White Elite will exploit the planet until they completely kill destroy every single ecosystem and pollute every single inch of land and water on this globe. We can’t humanize this system we must build our power and dismantle it.