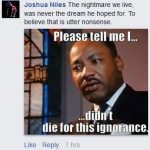 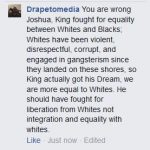 Black people elevate people to leadership, we follow their program, and when the fallout comes, we don’t blame the leader for implementing an ineffective or flawed plan, we blame the Black masses for failing to succeed when we were set up to fail by our leadership in the first damn place.

I respect King, but RE-SPECT means; To Look (spect), again (re); to look and see something over and over for better understanding. I respect King, and King respected us enough to wake and switch path, but the US government assassinated him before he could communicate his new views and new methods to the masses. After murdering King the government resurrected the “I Have A Dream” version of King and shoved him down our throats for the last 50 years!

We, as a commuity need to rebury the “I Have A Dream” King and bring back the emerging Revolutionary King that they murdered.

King and the Integrationist did the Black community a great disservice, some of them, like Dr. King eventually saw the light, but most of them not only stayed on the dead end course, they are still in leadership and still blaming the Black masses for their failures and the legacy of Integration that is destroying our people.