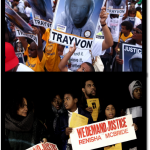 We seemed to have forgotten our own history and accepted the false propaganda of the White majority.

Whites inflicting atrocities against Blacks in the US has been the norm from the 1600s up to the late 1950s. In the late 50s enough of us had decided that we would no longer be passively terrorized or die alone. We decided that we would fight the Klan, the White Citizens Council, any individual bigot, the police, the National Guard, and even the US Military if we had to in order to end the open murder, mutilation, and random White violence against our people.

We also had to back that collective decision up by burning down over 200 US cities, by taking up arms and fighting wars in the streets with the police and National Guard, we had to endure bombs being dropped on our homes and communities, we had to watch our best and brightest be assassinated by government agents or their paid mercenaries.

The US government finally decided that it was too expensive, and too damaging to its global image to continue the national tradition of Thrill Killing, and violently abusing Black people. They began to enforce their laws against murder, assault, rape, child molestation, and theft when there was a White perpetrator and a Black victim for the first time in over 300 years!

Understand, before the mid-1950s, any random White person could murder, mutilate, rape, molest (any Black child), torture, rob, or take the meager belongings from any Black person without being subject to legal penalty, or simply getting a slap on the wrist!!!

The only security we had in those years was when we were the property of a slave owner, the slave owner could protect us from other Whites under Private Property Laws, but we had no protection from the violence or lust of the slave masters, or those in his employ! After the Emancipation Proclamation, it was open season on our ancestors because we no long were protected as property, that’s why lynchings started right after we were “freed.”

In the years between the mid-1950s to now, we still endure violence and unbalanced legal protection under the law, but we’ve also enjoyed a level of safety and security that we’ve never experienced before in this country, yes, even with the drug and gang violence, we have been better off because the psychological terror of know that any White person could do any damn thing to you without any fear of reprisal was universal for our people for all Black people for the majority of our time in this nation! Try to imagine what that was like.

We made the fatal mistake of allowing this history to be buried. We kept pushing the lie that we got our freedoms though Brave Non-Violent Civil Disobedience, which is a historical myth. We bled, died, and killed for the (token) freedom that we have today.

We didn’t tell our children how pathologically violent and murderous this nation is, and has been towards us, so later generations have let their guard down. Today’s Black youth think its funny when Whites say “Nigga.”

We’ve allow many of the strict lines that we had to draw with the White majority be crossed. We now think that having distrust of, and being cautious around White people is Reverse Racism, instead of a legitimate survival tactic.

We don’t tell Black youth to “what cho sef around White folks any more,” we think that today’s White people are that much different than their ancestors.

When we forced a reduction in White aggression against us in the 50s, it didn’t end is was driven underground and overseas, those Whites had to join the police force, become prison guards, or enlist in the military to satisfy their Blood Lust.

Now that the 3rd World Freedom Fighters and the collapsing US economy is forcing the Natural Born Killers to retreat and return home, they are gonna want to do their Thrill Killing locally and openly again. The killing is driven by both an inherent drive to do such violence and the insecurity they feel in losing their Global Super Power status.

We will see, as the economy gets worse, and the status of White Males becomes further reduced in the world an exponential increase in Trayvon Martin and Renisha Mcbride type killings, and these killers will become bolder, as will the police, prosecutors, and judges who will refuse to impose any legal penalty against them.

We need to, right now, resurrect the revolutionary unity and drive that our recent ancestors employ to get us this far to get to the next level of Pan-African Unity, Security, and Liberation.

(PS: The next time your are wondering why Black youth are so self-hating, violent, and are shooting each other in America’s Ghettos, remind yourself that we invested the last 50 years in seeking equality with a people who just spent the last 300+ years killing Black folks, we told out youth that their higest aspirations if full integration with a nation founded on Black/Native enslavement and genocide. Welcome to Equality with your Oppressor.)