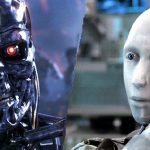 It is a reoccurring and ongoing fear of modern man that something we invent will eventually overpower us, rule over us, and subvert our free will and rational minds.

Wouldn’t that be horrible, if a thing man invented (out of thin air) was granted power over all humans, and it drove men to kill other men in its name, and it informed men that those who rejected the will of the invention are less than those who embrace the power and light of that invention; wouldn’t that shit turn the world into a violent, and divided place? Wouldn’t such a condition drive man to ultimately destroy himself and his world?

Thank GOD! mankind has yet to invent something like that, and let’s all pray to GOD! that we never ever do.