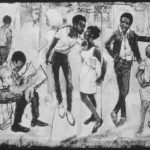 Do you ever wonder who was the brilliant White Supremacist who figured out that the White Elite could continue their military and economic domination of the world, continue to “legitimately” hold the lands that they brutally colonized and settled, and allow the “lesser races” to join them in the administration and defense of the Systems of Global White Domination, by simply modernizing and changing the language of oppression and domination.

Who told them that they didn’t need physical chains if they simply used debt, job security, and petty material rewards to hold people in bondage and prevent them from abandoning the White economy?

Who told them that they simply had to replace titles like Slave, Coon, Ni&&er, and Monkey, with more socially acceptable terms like Urban, Underachiever, Inmate, Poor, Welfare Recipient, and Human Resource?

Who told them that they could still Hunt, Brutalize, and Kill Black people for sport, if they just did it under the titles of military, police, and correction officers, or they’d have to get their thrill kills away from the eyes of the mainstream media in the so-called 3rd World?

Who told them that allowing a small segment of the Black population to accumulate millions or even billions of dollars ( Fiat currency) would be of no consequence to the overall global power balance? How the hell did they know that this “Black Elite” would have no desire to build independent Black Power and Infrastructure, that they would be happy to only consume that which Whites were willing to sell them?

Who told them that they could still satisfy their strong desire to see us degraded and as sub-humans if they stopped allowing Whites to portray us in Black-Face, and simply allowed Black actors to do the shucking and jiving, and allowed Black writers, directors, and producers to take the credit?

How did they know it would be OK for them to allow us to take on African names, to wear Kente cloth and Mud cloth, to talk about the Great African Achievements of the past, and to give us a whole month (the shortest and coldest) to reflect on our heritage and history; how did they know that all this action would not be Revolutionary or server as a rally point for the Black Liberation Struggle? How did they know we’d only use our history to inflate our egos without doing any thing to create a grand history for our descendants to reflect upon?

How did they know that they could still kidnap, indoctrinate, and sexually exploit our children at levels unheard of since the era of Chattel slavery, that all they had to do was form agencies like DCFS, HUD, WIC, etc, that made us dependent on the State, and our homes open to their routine intrusion.

How did they know that if they gave Africans a token Black president that they could intensify their war against the Black community, and their atrocities around the world and we’d cheer him on in utter ignorance and blind support?

How did they know if they gave the average Black person in America the slightest opportunity to deny the reality of our situation we’d take hold of it and never let go, that if they just cracked the window of promised assimilation and integration that we’d run through it and slam it shut behind us?

Those of you who understand and are willing to work with, and support our efforts I cannot express how much I truly appreciate you all; Past, Present and Future Allies.